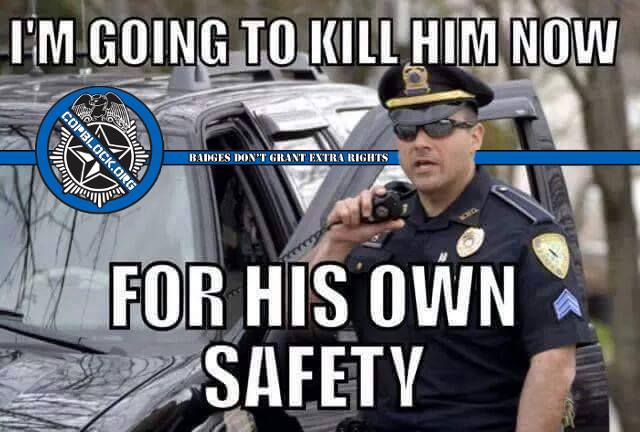 Tired of Seeing The Police, A Criminal Gang That Makes Me Sick By D. Bourne

I see police where they shouldn’t be and it makes me sick. Of course I don’t believe they should exist at all. Today going to the movies across from it and the first time I went there but left as it was too crowded, they were in there and hanging out in front of Dave and Buster’s not there to protect people or make sure people are safe. That is actually the real job of having real security. Security that is actually doing there job they should, should only be worried about the safety and protect of a business’s customers. Not arresting people that don’t directly hurt anybody. Unless they are trying to rob the place or kill someone there but in almost all other cases they should only tell the person to leave, not get them arrested. If a fight broke out they should break up the fight make sure no one else is hurt and kick out the people that were fighting not call the police, that is up to the people involved in the fight whether they want to get the police involved. But most security guards are nothing but untrained want to be cops making 15 dollars an hour if they’re lucky and want to exercise their tiny power they have in their life from their jobs and be authoritarian assholes to people. But to have police outside or in your business and wanting them there, which is obviously a request from Dave and Buster’s that they also pay for. As businesses pay for a police detail, which is not showing anyone they are safe it’s telling them they are not safe that they have to watch their actions in a way they shouldn’t. As the police are out for three things money, control and instilling fear. They are a criminal gang, criminals that commit acts of kidnapping, murder, blackmail, assault and more. I will never go in this or any Dave and Buster’s or any place that has a police detail or police hanging out there. If the police are somewhere I will leave and avoid that business. And the Dave and Buster’s I’m referring too also happen to be in a good area. The police are there to arrest people if any incidents happen, and watch what people are doing, and then harass them if they are doing something the police think they shouldn’t be or even suspect something is going. When I was leaving in the parking lot I saw a little skinny girl handcuffed with three criminal police cars and even more officers. Probably the ones from Dave and Buster’s, it may have even been over drugs and drinking. They had all doors open on her car with stuff on the roof while she had to stand them cuffed. I pulled up as close as I could, as an arrest is public information people should be able to ask and get information as why someone is being arrested. But of course they wouldn’t tell you anyway. F’K the criminal gang known as the police that take 6 officers to arrest and pull over a tiny girl, who even knows what they are accusing her of and what rights of hers they violated in the process.