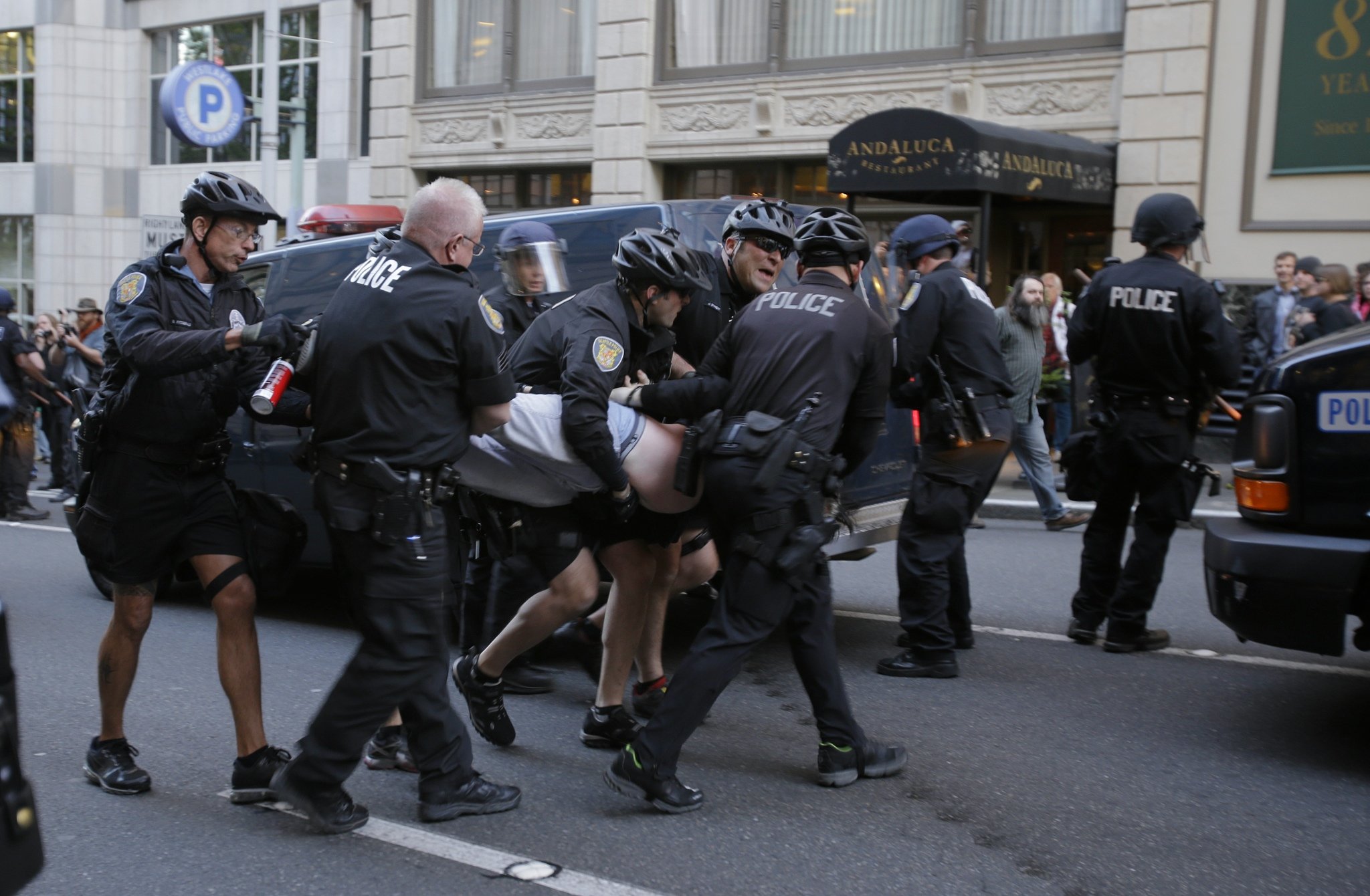 All Cops Are Criminals: As Are All Government Agents of the court, members of the prison industrial complex and of course politicians by Dave Bourne

All cops are criminals. Many people would disagree, deny or even get angry over this statement. There first question if they aren’t too angry to ask is “How do you know?” or “Based on What Information?’. However unlike 95% or maybe even 99% of people in America I have an actual logical and rational explanation as to why I believe this. Unlike people that they say “there are just some bad apples” because they know a few cops. Or most cops are good, because they have friends and or relatives that are cops. Or an actual response I got once from a women I met a cop once and he was nice, getting very angry when I said all cops are bad. As in her mind based on her one experience and years of brainwashing most cops are good. She couldn’t believe that I would say something like that. This is not about how police act in their personal lives when they’re not on the job, we all know cops have families and friends and even though have the highest rate of domestic abuse among professions, they do have people that love and care about them. As well as friends that would say positive things about them. Which is totally irrelevant when it comes to how they treat people and violate their rights while their on the job. Unfortunately people confuse the way police act in their personal lives with the way they act on job, and then assume they are good cops on the job because they believe they are good in their personal lives and maintain that view. This leads to defense of police that commit unwarranted acts of violence, harassment and even murder, because of their view of the officer outside of their job. Most of the online and social media posts defending police come from police themselves, former police and other government agents, and friends and relatives of police that have never dealt with them in the course of their job. The fact that they are thought of as “good” people in their personal lives means nothing when it comes to whether or not they are good cops, violate people’s rights, oppress or even murder people.

Most people that say cops are good haven’t ever been arrested and or had much contact with police on the job. Nor have they had much experience with the system. There is of course also a certain percentage of people that have been brainwashed by the government media propaganda, government schools, politicians and police themselves at a young age. I’ve had the unfortunate circumstance of having many interactions with police, 99.9% being negative, along with my experiences in the corrupt injustice system, which is only one of the aspects that leads to my conclusion that all cops are criminals. And it isn’t even the most important part. I could give all the examples of my personal experiences in detail which would show the police for what they are but won’t do that in this article, like when I was 16 and a cop tried to strangle me through my car window while I was sitting in the driver’s seat of my car. Because of a misunderstanding in which he didn’t want me to park there as they were kicking people out of a party, even though I had the right to park there to wait for my friend as it was a public street. Or being ripped out of my car passenger seat by LVMPD, after having a gun to my head as the cop approached the car, for asking why they were questioning me or what I did wrong. Then being charged with obstruction of a police officer for obstructing their investigation of me. Which resulted in huge bruises and the judge deciding that assault and battery (by ripping me out the car and kneeing me in my back) is police procedure and even know you have to have intent to obstruct an investigation and I didn’t even know one was taking place he found me guilty as did the appellate courts in affirming and the supreme court of Nevada denying to take the case. I could go on from their attitudes to their threats to even false arrests, for quote “not liking my demeanor” when I was minding my own business. But that alone does not bring me to the conclusion that all cops are criminals or bad. It of course doesn’t help and admittedly helps to shape my opinion of police which my first “on the job” encounter that I can recall was at age 12. As they of course had police speak at elementary school to try to brainwash kids to even calling the cops on their parents. But at most it brings me to the conclusion that a lot of cops are bad but not all, maybe even most but still not every single one allowing for the blanket statement I’m making that ALL cops are criminals. I have put together a list at the end of the article of a summary of my rational as to why all cops are criminals and this would in fact be the first. But even with all of the cops I have come in contact with it isn’t even one percent. So to come to that conclusion solely based on that alone wouldn’t be fair.

Along with my personal experience with police, there are the experiences of all the people I’ve met, friends, relatives, acquaintances. Granted I only heard their side of the story in most cases (I witnessed a few) but a funny coincidence is they were all very similar to mine in many of the basic circumstances. Whether it was a traffic stop and the cop’s attitude was demining, disrespectful or talking down to the person or an arrest and violation of rights. One thing they all had in common regardless of the seriousness of the crime was the treatment they received from the officer. And in most cases age, race, and whether they had a criminal record or not didn’t matter, neither did their demeanor; they were still treated badly in some aspect. Now of course some were worse than others. This assisted in the confirmation that my thoughts and experiences with police weren’t different than anyone else’s, at least the people I knew. But what about the people I didn’t know. Government media would never air national stories of police abuse, violation of rights or even murder of unarmed people with the exception of a couple of obscure cases, such as Rodney King which only aired because it happened to get caught on video and not stolen by the police before getting to the media, which was rare in those days. But when the internet was created and became popular and independent journalist on the internet along with police accountability groups started to follow and publish verifiable information on police. And everyone started to get cell phones with video cameras and post videos of police abuse to sites like you tube not only did it help to verify even more what some people had already thought, but made available more information on the true goings on of the police.
The one problem that exists in the first three reasons why I believe all police are criminals is there could be exceptions although there is no don’t in my mind those three alone represent a large majority. But the fourth and final reason cannot be argued or disputed at least in the action being performed which is a fact. The interpretation of the facts can be argued and people are free to make their own opinions and decisions best on those opinions. In many episodes of Non Partisan Liberty For All and other articles and blogs self-ownership has been discussed. Self-Ownership, which is the concept that you own yourself and based on that you have the right to do whatever you want as long as you don’t hurt anyone else or their property and possessions. In relation to laws and the police, they violate people’s rights to self-ownership which is a right you are born with regardless of what the government, their laws and or government agents try to tell you. They have no authority to violate your right to self-ownership and inforce this by the barrel of a gun, millions of government agents and other weapons. They also do it without consent nor do people have the right to decide or consent on your behalf what you possess or put in your body. Consuming and possessing whatever you chose is no business of the government or anyone else for that matter. When government agents arrest people for possession of drugs, guns or anything else deemed illegal by the government they are kidnapping you. Kidnapping is a serious crime with aa helpless victim especially when you are locked in a cage and held for ransom (bail) and then kept for a specified time based on the amount of time the government chooses for you to spent in a prison. All cops at some time in their careers have at minimum arrested someone for drug possession which makes them all kidnappers. Therefore kidnapping is a crime with a victim and thus the police are all criminals along with anyone else within the system that contributes to their kidnapping and holding them after their initial kidnapping by the police. This would also include the prison guards, judges, prosecutors, politicians and even juries, regarding juries some members may even claim to own themselves and then find people guilty of these crimes, which must mean they believe they are owned by government. Don’t ever forget about the role of the judges, prosecutors and politicians as the police are just their dogs that take their orders. Most people just blame the cops who deserve the blame they get but most people give a pass to the rest of the people in the system, especially politicians who are some of the biggest criminals in the country.

Summary of why the Police are Criminals:

This actually applies to all other government agents, agents of the court, people in the prison industrial complex and of course politicians. 1 through 3 would apply to most of them as well. These are the real criminals.